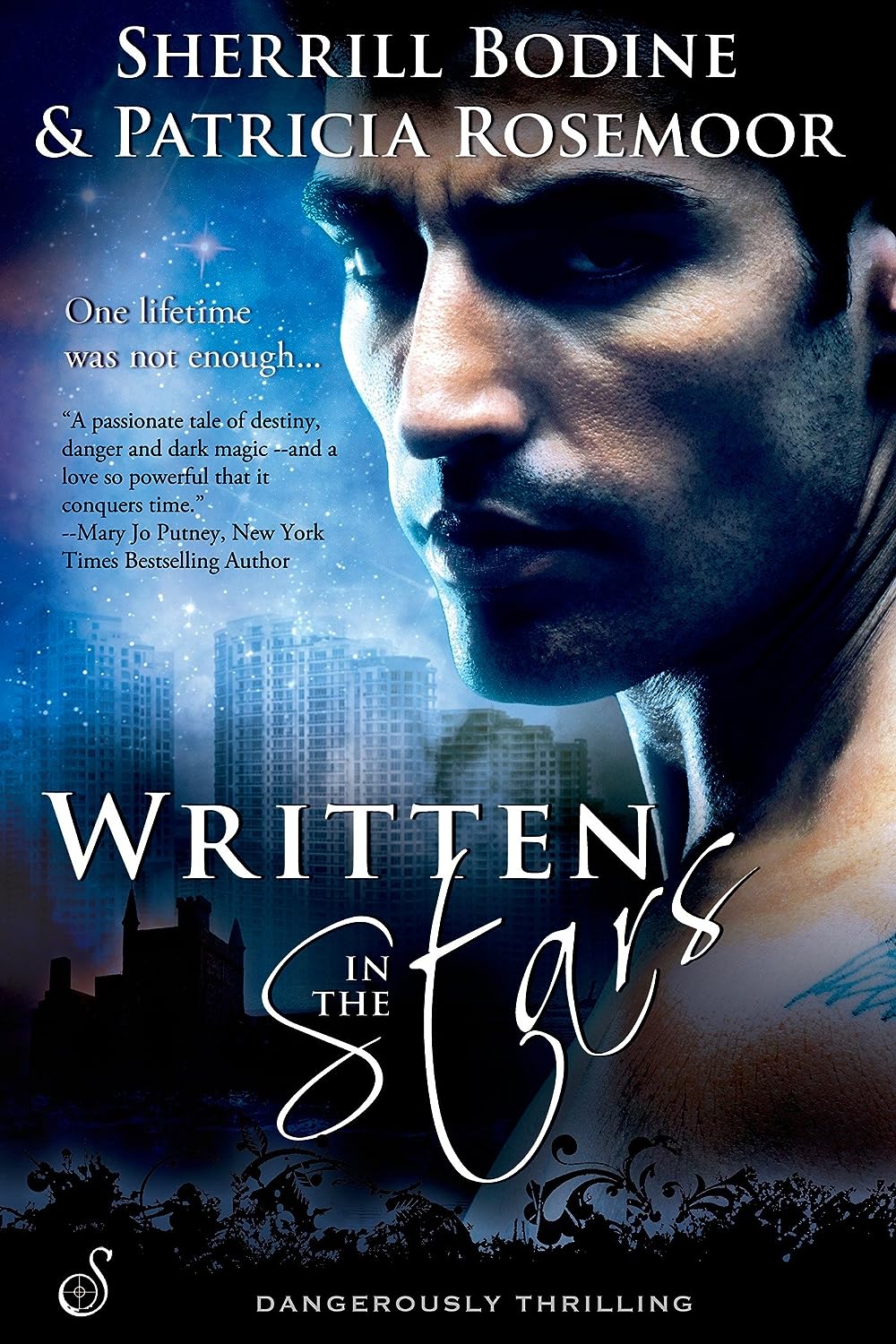 Will history repeat itself? Or will magic travel through time to chase another couple bound by love?
We am pleased to announce the release of Written in the Stars by best-selling authors Patricia Rosemoor and Sherrill Bodine.
“A passionate tale of destiny, danger and dark magic—and a love so powerful that it conquers time.” Mary Jo Putney, New York Times Bestselling Author
———–
A bit about Written in the Stars:

‘A love so deep that it can last through centuries?
In 1601, Lady Elizabeth York’s star-shaped birthmark proclaims her a child of magic. When she arrives at Dunham Castle to marry Carlyle, heir to the Duke of Lennox, she finds enchantment in the eyes and touch of Will Grey, the Duke’s bastard son. Bewitched by Elizabeth, Will defies all for their love, and his jilted half-brother places a curse on them both.
Searching for a treasure ship sunk long ago, present-day marine archeologist Cordelia Ward is pursued romantically by both salvager Innis Foley and treasure hunter Morgan Murphy. She is haunted by a murderous nightmare where one man is the killer and the other the victim.  But which man is her enemy–which one her soul mate? Can a journal that belonged to her ancestress, Lady Elizabeth York show her the answers…in time to save her true love?
Chased by evil, two women discover their own magic to fight a villain’s curse on the Posey rings that draw them to the men they are destined to love.
Available:
———–

A bit about Patricia Rosemoor :
With 90 novels and more than seven million books in print, Patricia Rosemoor is fascinated with “dangerous love” – combining romance with danger. She has written various forms of romantic and paranormal romantic thrillers, even romantic horror, bringing a different mix of thrills and chills to her stories.
Patricia has won a Golden Heart from Romance Writers of America and two Reviewers Choice and two Career Achievement Awards from RT BOOKreviews, and in her other life, she teaches Popular Fiction and Suspense-Thriller Writing, credit courses at Columbia College Chicago. Three of her Columbia grad students and two students from other venues are now published in novel-length fiction.
SKIN is her first original indie thriller. With 53 Harlequin Intrigues since 1985, she is now writing romantic suspense for Ignite, an imprint of Entangled Publishing.
————

A bit about Sherrill Bodine:
Sherrill Bodine is an author, fashionista, and world traveler. She has published 19
romance novels, co-wrote a comic book, and was a contributing columnist to the Chicago Sun-Times. She currently resides in Chicago where she frequents fashion shows and charity galas with her longtime Prince Charming.
While moving 22 times across the country and rearing her children with her husband, she sold stories to Fate Magazine, Home Life Magazine and True Confessions. In 1988, she sold her first novel and a week later received a two-book contract from Fawcett. Sixteen novels later, she’s seen The Other Amanda win the Wisconsin Romance Writers of America Write Touch Readers’ Award and Talk of the Town chosen by Cosmopolitan magazine as its “Red Hot Read” for February 2009.
Links:
Patricia:                    Sherill:
website                     website
Facebook                  Facebook
Twitter                     Twitter
Goodreads                Goodreads
————–

They will also be celebrating the release of their book with a book launch party at McNamaras 4328 W. Irving Park Rd,, Chicago Il. from 6-9pm. We hope you can join the fun, if not in person, then on the web;)  Look for the link to the live feed to the party on Patricia’s website coming soon.
—————-
~MY THOUGHTS~
http://mybookaddictionreviews.com/2013/09/21/review-written-in-the-stars-by-patricia-rosemoor-sherrill-bodine/
————-
Please spread the word!